In celebration of the Grayowl Point review (see the March 16, 2011 post), visit www.cdbaby.com/cd/shawncrowle for a free mp3 download of “Running”, one of the top tracks off the debut, and check out the rest of the album on Itunes, CDBaby, and AmazonMP3.
No comments:
Email ThisBlogThis!Share to TwitterShare to FacebookShare to Pinterest

“For Shawn Crowle there is no in-between. You’ll either love this album or you’ll hate it. Whatever you do think of it, you’ll have to admit that he is a seriously unique Canadian voice.


Crowle is an experimental folk singer- as strange as that sounds. His music borders on Tom Waits territory. It’s truly something interesting to hear.


The musical arrangement of Crowle’s songs is usually pretty basic- a guitar or two and the occasional keys. This suits his album perfectly. An elegy is a mournful lament for the dead, and the songs conjure up images of a barren town covered in blowing dust. The guitar chords are simple and beautiful.


What will make a listener love or hate Crowle is his voice. I mentioned he’s somewhat like Tom Waits, in that his voice takes some getting used to. His voice is wheezy and raspy which could be a dealbreaker. And this is what makes him so interesting- his vocal style is radical, something you’ll be hard-pressed to find elsewhere.


Overall, the album feels exactly like an elegy- each song feels like it is mourning the dead; there are even a few song titles about specific people. Crowle is truly a voice that you need to experience when you’ve think you’ve heard them all.

http://glasspaperweight.wordpress.com/2011/03/16/review-elegy-shawn-crowle/
No comments:
Email ThisBlogThis!Share to TwitterShare to FacebookShare to Pinterest

With a voice that most closely resembles... 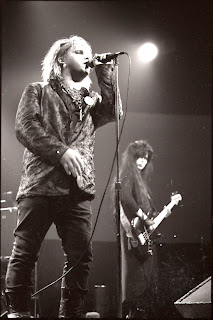 In a recent review (see the March 14, 2010 post) my voice was compared to the late Jeffrey Lee Pierce (pictured left), front-man and founder of the influential 80s punk band, The Gun Club.  It’s not the first time I’ve been compared to punk artists, and while I’m not an avid listener of the genre, there is a lot that I respect about the early punk movement of the 1970s and early 1980s.
First and foremost was the emotion.  Many punk acts eschewed musicality in favor of emotion, and while the emotions themselves may be different (anger and rage vs. desolation and despondence), it’s something I’ve often done with my voice.  It’s more about the need to express something, or tell some story, instead of about musical virtuosity.  This isn’t to say that all punk bands lacked musical ability, Pierce was rooted heavily in reggae, blues and country while The Clash pulled elements from a wide range of genres into their music, they just didn’t let it get in the way of what they were trying to say.  You could go into the effects of dissonance and intonation on emotional response, etc. but you’d be over-analyzing it; there’s an emotional response, because there’s nothing in the way of the honest emotion - no effects, no frills, and no patched together takes.
The artists usually had a strict DIY ethic and minimalist approach.  In a way, the early punk were also some of the earliest indie lo-fi musicians, featuring stripped down instrumentation and straightforward songs.  The recordings were often self-produced, sometimes recorded on home-tapes or four-tracks and were usually intentionally unpolished, with the sole intention of sounding “real”.  They were often distributed solely through word of mouth and informal, underground channels.
While nobody could ever mistake me for a punk artist, these are some of the elements that inspired me, and which I have drawn on for my own music and in particular for “Elegy”.
No comments:
Email ThisBlogThis!Share to TwitterShare to FacebookShare to Pinterest

A new album review of “Elegy” from the good folks at Leicester Bangs:

“With a voice that most closely resembles that of the late (and quite possibly great) Jeffrey Lee Pierce, Shawn Crowle certainly stands out in mannered singer-songwriter circles. His debut album, a conceptual piece revolving around a small town in decline is perfectly suited to his melancholy yelp, and although there’s an element of perseverance involved in truly understanding the lyrical complexity of Crowle’s words, there’s no doubting the despondency in which he wraps them. If desolation, sadness and a yarn or two appeals, then you may wish to investigate further.”